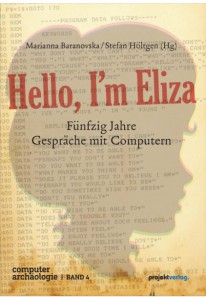 “It may be one of the most remarkable outcomes of digital technology that humans can now engage in conversations with algorithmic actors. This phenomenon – which originates from ELIZA and has gained new momentum with the introduction of graphical avatars – raises fundamental questions to the art of theatre, as it may undermine the dominance of human actors. The conference whose proceedings are gathered in this volume addressed this topic by presenting not only scholarly but also artistic approaches. Hosted by the Medientheater at Humboldt University in Berlin, it embraced the opportunity and included the performance BLACK 7 by the group Theater.Macht.Staat. In the wake of the performance, Carolin Kipka and Anton Pohle from Theater.Macht.Staat exchanged some thoughts on the theatrical potential of human actors on the one hand and nonhuman agents on the other with performance scholar and artist Ioana Jucan, who had introduced BLACK 7 at the conference, and Florian Leitner, director of the Medientheater. The following article collects these thoughts, discussing topics such as: the challenges faced by actors when embodying avatars that represent abstract algorithms; the artistic potential of avatars joining or even substituting human actors; the difficulty of artistically reflecting on artificial intelligence and consciousness when being a nonartificial intelligence (whatever this may mean); chatbots as performers in algorithmic theatre; the impulses that may be derived from performative approaches such as BLACK 7, early AI research projects such as ELIZA, and more recent artistic developments for a “Media Theatre”, particularly with respect to the notion of “scene.” As an initial impulse for this discussion, a rather bold question was asked: Is the human the problem?“